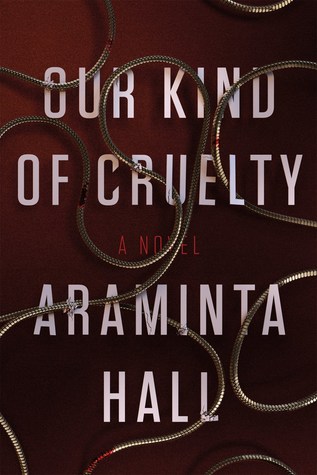 Book Review -‘Our Kind of Cruelty’ by Araminta Hall

Rarely has a book ever creeped me out quite this much.

Such a simple problem, a guy that is way too in to you, can become a nightmare of epic proportions. And in Our Kind of Cruelty, Araminta Hall takes this to the nth degree, while throwing in some not too subtle commentary on society’s uneven judgement of women and their sexuality.

Written in the first person, we get to see the inside of Mike Hayes’ mind as he deludes himself about his relationship with V, former girlfriend Verity. He sees everything she does as a sign that she truly wants to be with him. Even in the e-mails where she firmly tells him to please get on with his life. Even when she marries someone else.  Even when she suggests he should get therapy (which was a really good suggestion, because the guy is full on bat-shit crazy). But Verity, whose very name means truth, is really speaking and behaving in code Mike insists, one that only he understands.  It’s all an elaborate game, and only they know the rules.  Meanwhile, all Verity is trying to do is be caring and kind and polite, all the things that we women are told to be and do, instead of doing what she should, which is to slap a retraining order on his insane ass.

I doubt any woman has not had to deal with a Mike Hayes in her life. I had a seemingly normal businessman that when rebuffed alternated between sending me massive balloon-a-grams at work and leaving scathing voice mails calling me very unballoon-like names. Another time, a social worker who I met while volunteering vandalized my car when I wouldn’t go on a second date with him. I parked my vehicle down the street after that, but it didn’t deter him. He cut down the small maple tree in my front yard. After that, he backed off, perhaps realizing that resorting to arbour violence was a step too far.

But the problem with Mike Hayes is he gets other people believing his twisted fantasy. Even as a reader, I was almost undecided until the very end as to whether Verity was really all the things he said she was. That’s how convincing he can be.  And the cards are further stacked against the poor woman as she is judged by the harmless sex games the two used to play when they were a couple. A judgement  that Mike doesn’t have to worry about as a man, where you score points for your sexual appetites instead of being penalized for them. Verity is portrayed as a temptress, a prick tease, a seducer of good honest men like Mike Hayes. It is the curse of Eve, which is not your once a month normal bodily function, but the pervasive idea that women are at fault for the things men do. That every time an unsuspecting Adam bites into the wrong apple that we must find the closest woman to the tree and blame his behavior on her. Hmm, maybe this was the point the social worker was trying to make when he cut down my maple.

But then again, maybe I am just talking in code. I’m a woman, and we never really say what we mean, right?

See below for a link to this extremely skilled author’s profile on Goodreads. Check her out and her books.  Then leave a comment here about the story of your own Mike Hayes. I know you’ve got them.