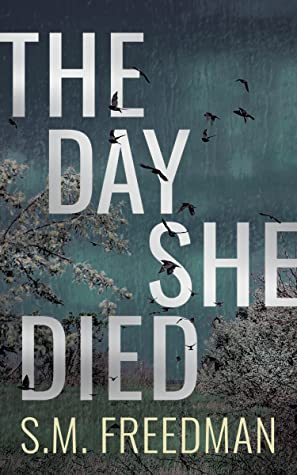 I like novels that tell a story in both the present and the past. After all, so much of what we become is tied up in where we have been. When an author uses this shifting perspective it’s like getting two mysteries for the price of one. In any old book you can read to find out what happens, but in books like this you get to discover the secrets of what already has. It’s a bit like gossip that way and just as juicy if it’s done well. And S.M. Freedman has done it very well in her newest thriller, The Day She Died (Dundurn Press, April 2021).

The book begins with Eve surviving a car crash, just barely. She’s broken just about every bone that matters and suffered a brain injury that makes her more muddled than my Aunt Shirley after her third glass of chianti. But despite this she manages to recover, albeit somewhat damaged, just as she did from her childhood which was a vehicle wreck of a different sort. Eve’s mother didn’t know much about love, other than the tough variety. And despite the wonderfully affirming presence of her grandmother, Button, Eve seems to have spent the better part of her formative years feeling like an unwelcome house guest. She’d have been lost without her best friend, Sara, who had a “laugh like wind chimes in a storm” (p. 56), and Sara’s big brother, Leigh, who set Eve’s tween heart fluttering like a leaf in one. In the present day, Leigh rushes to Eve’s bedside after the car crash, but something appears to have happened between them all those years ago, and perhaps more importantly something happened to Sara. Unfortunately, Eve’s memory isn’t too reliable in recalling either of these events, or perhaps part of her would rather forget. And Leigh doesn’t seem too forthcoming with information. Hmmm.

This book has more twists than a Yoga Spine class. I like to think that I’m pretty good at spotting the big reveals before the author pulls the curtain away, but Freedman staged an unexpected reversal on me more than once in this book. What’s more, there were times I thought the characters were behaving inappropriately and that I, the “experienced reader” had spotted an inconsistency. But later, the character and the behavior were completely explained, and I was left with egg on my face — which I didn’t even mind because the way Freedman pulled off fooling me was just that cool.  The fact that the book is evocatively written in a league that holds its own with literary fiction (think Ashley Audrain’s The Push) didn’t hurt either.

You don’t win Best Debut (Suspense Magazine) for your first book because you don’t know how to hold a reader by the bookmark and squeeze. And in this latest novel, S.M. Freedman does not disappoint. The Day She Died will be a day you won’t soon forget.

To find out more about S.M. Freedman and her novels, go to https://www.smfreedman.com/