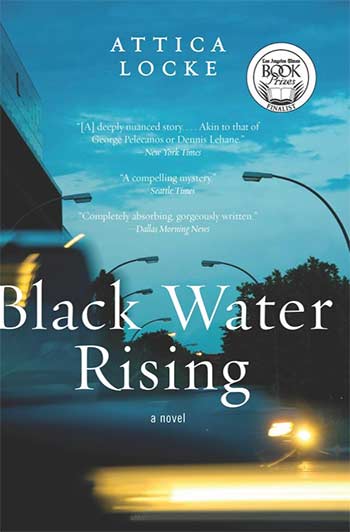 Jay Porter wants to give his heavily pregnant wife, Bernie a decent birthday present. So, he arranges for a “moonlight cruise” on the bayou. He should have stuck with jewelry. The boat is basically a barge strung with mismatched Christmas lights and the bayou is a narrow strip of muddy water thirty metres below Houston’s downtown street level. I’m not sure if the moon ever enters into it. Bernie doesn’t even want to get out of the car when she sees the floating eyesore.  Smart girl.

But they make the best of it. Her sister has decorated the inside of the cabin with balloons, left them a dinner of brisket and a cooler of beer and grape Shasta. Not quite the romance Jay was going for, but he is short on cash, still waiting for the “slip and fall” cases he takes on as a lawyer to pay off. That is when they do pay off. Most of his clients can’t afford to pay him by conventional means, so they do so in trade. The “boat cruise” is one of those payments. Once again, jewelry would have been a safer bet.

But a botched birthday present is the least of their worries. Out on the water, floating by one of the more dangerous downtown wards of Houston they hear screams, then gun shots, then the sound of someone struggling in the water. Jay jumps in and saves the day, but the woman pulled up onto the boat comes with more questions than answers. She has no shoes. She has no identification.  She doesn’t even have a present for Bernie.

After the captain brings them back to the dock, Jay and Bernie drive the mystery woman to the police station and drop her off there. Jay doesn’t go in. He doesn’t want to talk to the police. He doesn’t want to get involved. Even when he sees in the newspaper the next day that a man was found shot dead in fifth ward, even when the boat captain turns up dead. You’d think he would go to the police after that, but he doesn’t. I would, but Jay wouldn’t. I am a white woman of privilege. But Jay is black.

Sure, he has a record, so this explains part of his reticence. The story takes place in the 1980’s in Texas and Jay was an activist for civil rights in his university days. He almost ended up in prison for a long stay on trumped up charges of conspiracy to commit murder, even though the most radical thing he ever did was suggest people boycott cherry cola.  But his radical and white former girlfriend who marched alongside him back in those days is now mayor and Jay is still trying to eke out a life where he tries to be as invisible as possible. Herein lies the difference, my friends. But while Jay doesn’t go to the cops, he does investigate, and what he uncovers goes far deeper than the dark muddy bottom of the bayou.

This book is a thriller, and a page turner, and an excellent examination of the civil rights and labour movement of the time. The characters are rich and textured, and the writing superb. I don’t want to make it sound like a downer because of the race thing.  It can be uncomfortable sometimes to read a book like this if you haven’t lived the life Jay has. But it is important. It is an eye-opener, and when a novel can be both a thrilling read and a tool to smash ignorance, it is doubly important that you read it. As Jay’s father-in-law, the wise Reverend Boykins says “Pretending people aren’t black is not the way to equality. It’s not even possible, first of all. Any more than I can pretend you aren’t who you are.”  Amen. Rev.

Silenced for so long by the fear of speaking up for what is right, Jay will find his voice again by the end of the story, along with the culprits in this tangled mystery. After years of being afraid to make waves, the blackwater he dove into that night will restore the current of his rightful self. I don’t think Bernie could ask for a better birthday present than that.

Although I hear she is still holding out for a bracelet.

For more on Attica Locke and her books, go to http://www.atticalocke.com/