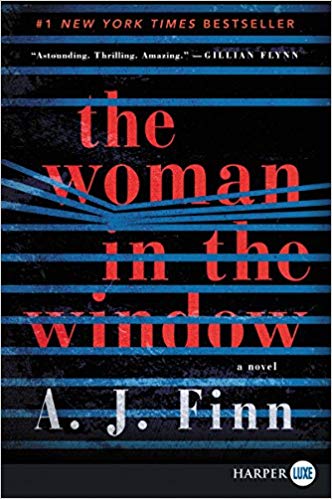 The Woman in the Window By A.J. Finn

Okay, I said I wasn’t going to pick up any more novels with “woman” or “girl” in the title this year, but a friend gave this to me to read and I am not one to look a gift-book in the mouth.

It is also not a book by a woman author. But I thought I would include it on the blog because even though A.J. Finn may not possess a double X chromosome, he sure did create an authentic and multi-layered female lead character in Anna Fox. For that he gets honourary shekillslit status.

Agoraphobia is a crippling disease. Anna can’t bring herself to go outside. She can barely go to the front door. She only manages a few steps into her backyard with her therapist by holding a large black umbrella in front of herself like some sort of armed version of Mary Poppins. This lady has it bad.

So how does she fill her days? By watching the lives of the people on her street who can go outside. Although usually they are inside, and she is watching them through the warmly lit windows of their homes, with a Nikon trained on them. Sort of makes you want to invest in some good blinds. But Anna isn’t a peeper, or a pervert, she is a woman who has experienced an incredibly traumatic event that has changed forever her view of the world. A world she can only look at now through the safely windowed portals of her home.

Until she sees something she shouldn’t. The Russell family have just moved in across the street. This is interesting and deserving of a few clicks of the Nikon, but not life changing by any means. Although the lady of the house does come to visit, and Anna isn’t used to visitors. But she likes Jane Russell. She is friendly and laid back and doesn’t even make comment on Anna’s camera tripod set up in the living room trained on her house. Anna might even like to see her again. And she does. Although the next time is through the living room window, and Jane’s being murdered, so this doesn’t exactly get someone in the mood to bake muffins and drop them off or anything.

Bravely, Anna attempts to help her newfound friend, even venturing outside with her umbrella where she collapses in a massive panic attack after calling 911. But the police are no help. They think she is a loon. And Anna starts to think they may be right. Especially when a very irate Mrs. Russell walks through her front door, very much alive, and very much not looking like the woman who introduced herself as Jane Russell on her visit.

Too bad Anna didn’t get a photo of the murder, the woman crying out for help from across the street, as she silently slid down to the floor leaving her bloody handprint on the glass. The handprint is gone, and Anna finds herself with no proof of what she saw, and no one prepared to believe a woman who can’t pick up the newspaper off the front stoop without falling into a dead faint.

I think the most terrifying phobia we all have is not being believed. It is worse than heights or snakes. To not be believed is not to be seen, and Anna is a woman that knows what it is to be hidden. This is a life she has chosen, or perhaps “chosen” is too strong a word when your mind and your body betray you every time you try to step into the fresh air. Anna knows she has a problem, but she doesn’t think she is so far gone that she could imagine a different Mrs. Russell and a bloody murder. But she’s not sure, and that begins to rob her of what little sanity she is hanging onto.

But even within the confines of her home and her disease, Anna will find a way to solve the mystery. And in so doing she will reveal not only what really happened across the street, but what happened to her, the tragic accident that caused her to become a recluse with nothing but an umbrella and a Nikon for friends.