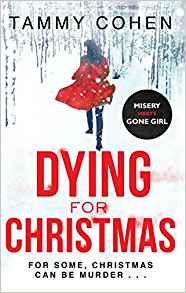 Dying for Christmas By Tammy Cohen

I wanted to review a book with a holiday theme for the season, and thus selected the talented Tammy Cohen’s Dying for Christmas for my Yuletide noir read.  I thought I’d get a hokey and tame mystery, perhaps the murder of a vicar at midnight mass, or a Boxing Day stabbing death with a sharp piece of mistletoe. Instead, I got a story that was blacker than the coal Santa will leave in my stocking next year for even thinking to review a book like this.

Dying for Christmas does for the Twelve Days of Christmas what the movie Seven did for the Seven Deadly Sins. I don’t know if you saw that movie, maybe I’m dating myself, but it stars Brad Pitt when he was so young he hadn’t even married and screwed over Jennifer Aniston yet. Brad is a detective trying to catch a serial killer that is killing off folks by way of the Seven Deadly Sins. The murder attributed to “sloth” still terrifies me so much that I haven’t been able to sleep in past 8 o’clock on a Saturday in over 20 years.

Tammy Cohen uses the Twelve Days of Christmas in a similar way, but not with a serial killer. I won’t tell you how she warps this Christmas classic round song, but if you ever catch a strange but charming lord leaping at you on Christmas Eve, I suggest you club him on the head with a pear tree and run.  Jessica Gould did not have this good advice to guide her and will end up spending the holidays in a most uncomfortable situation, being “gifted” each of the twelve days in a way that could lead to her death. Which makes her Christmas even worse than that year your Uncle Bob made fart noises with his arm during dinner, and the time your mother told your live-in boyfriend “to shit or get off the pot” and marry you.

Christmastide or the Twelve Days of Christmas run from December 25th until the coming of the Epiphany on January 5th, which marks the date that the three wise men visited the Christ child. This totally blows out of the water the whole Christmas nativity scene for me, as its staging gives the impression that the birth of Christ and the gifts of the magi all happened in one night, sort of like the ghosts in A Christmas Carol. I don’t even know how the little drummer boy fits into it all. But enough of my inattention during Sunday school. This review will be published on New Year’s Eve, or the seventh day of Christmas.  And I want to tell you that no matter how lousy your New Year’s is, as long as you are not spending it with a psychopath giving you “presents”, it will not be as bad as Jessica Gould’s.

But wait, before you think this book will be too much for you, think again. Sure, there is a cringe factor of having your favourite holiday tainted worse than the year your sister tried to kill you all with botulism in the turkey stuffing. However, Dying for Christmas is way more than a well decorated tale of terror under the tree.  It is also a surprise. Because just when you think you know what to expect, and you’re sure you can’t handle one more gift that your “true love” gives to you, things change. A twist, that I never saw coming, and I don’t think you will either. And isn’t Christmas all about surprises?

There are few authors that can pull off the a fully unexpected “gotcha”, while at the same time freaking me totally out with a creative and spine-chilling premise. Congratulations, Tammy Cohen. I hear you are a member of the Killer Crime Writer Collective, and you completely deserve to be.

But don’t send me a present, for this review, for Christmas, or like, ever.

To find out more about Tammy Cohen and her books, go to http://tammycohen.co.uk/