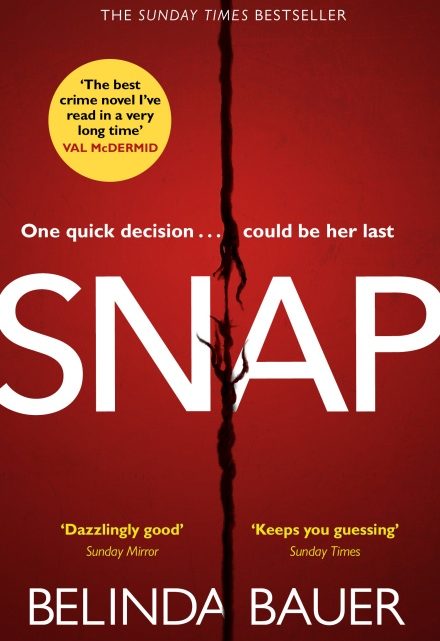 There are a lot of scary stories told from the perspective of children these days. Whether it is the resurrection of Stephen King’s IT or the mass popularity of Stranger Things, young people are at the forefront of bad things happening.  I think it is a result of people getting tired of the “terrified woman” as a cliched fear ratcheting device. Kids are just so damn wonderfully vulnerable. And when we put them into desperate circumstances our empathy goes up a notch.  I also think that you don’t have to pay them as much as adult actors, so there’s that.

Whether Belinda Bauer had this in mind when she penned Snap, is up for debate. She is an award-winning author. She doesn’t need to jump onto bandwagons or adopt fads. Snap was longlisted for the Man Booker Prize. You don’t get that far by being a flash in the pan. I think she was just drawn in to exploring the effects of a mother’s murder on the children left behind.  New perspectives such as these have brought us ground breaking books like Room, the story of a woman’s abduction and imprisonment as told by her five-year-old son born in captivity.  Novels like these tell us a story in a child’s voice but are as far from Young Adult fiction as Miss Marple is from Kill Bill. Plus, they are way creepy.

In Snap, the son who tells the story is fourteen years old. Three years ago, when Jack was eleven, his mother left him and his little sisters to wait in the car, while she went to find a pay phone. The car had broken down. She didn’t have a cell phone. Sounds crazy, but it does still happen. I tried to use a pay phone a few years back. It smelled deeply of urine and the plastic talking end of the receiver had been melted off.

Jack’s mother never came back. The story of the three children finally leaving the safety of the car to look for her is heartbreaking.  They walk on the shoulder of the hot highway in vain while people drive past. Nobody seems to notice them. While the kids do get home. Their mother never does.  A week later her body is found by the police. The family falls apart.

But the true tragedy is that three years later the kids are living alone in that same home, their father having done an unpardonable runner.  Jack has been supporting himself and his sisters through the spoils of cat burglary.  Merry, his four-year-old sister mows the lawn to keep up appearances. His other sister, Joy barricades herself behind piles of old newspapers as if caught in a junior episode of Hoarders. None of them go to school. Once again, nobody notices.  Until Jack gets caught. Or let’s himself be caught. Eager to involve the police now, because he thinks he may have found his mother’s killer.

Well told and with unique and memorable characters, Belinda Bauer does an excellent job of getting into the head of a fourteen-year-old boy pushed into impossible circumstances.  And surprisingly there is humour in this. If just by picturing four-year-old Merry methodically walking back and forth to cut the lawn when she can barely reach the mower’s handle. Which I swear, I would notice, and not ignore, like the people in this book.