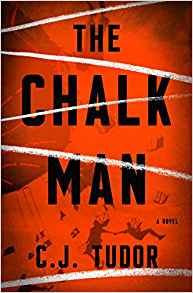 Okay, this time I wasn’t going to be fooled by initials into reviewing a book that was really written by a dude. C.J. Tudor’s first name is Caroline. Her friends call her Caz. I also write under initials my initials. My first name is Carole. The only nickname I had that ever stuck was the unfortunately catchy rhyme of “Carole the Barrel,” coined during the plump years of my early elementary school .

The Chalk Man features elementary school children as well, all with nicknames. Eddie “Munster” Adams tells the story.  HIs best friend is Fat Gav.  Metal Mike, Hoppo, and Nicky complete their band of twelve-year-old buddies, thick as only the per-pubescent and thieves can be. Nicky is the token girl and therefore doesn’t appear to warrant a nickname. Although, I would like to point out that there is a unique rhyming opportunity here and obviously the kids in her school were not as imaginative as my own. The other difference between the children of my youth and this story, is that Eddie’s little group finds the body of a dismembered young girl in the woods, and the most exciting thing my friends and I ever found was a pornographic book hidden in an old shack in the woods. There is no real opportunity for poetry in either.

Fast forward thirty years and Eddie and his childhood friends are all grown ups with grown up problems, although Hoppo still lives with his mom, which is increasingly becoming a grown-up problem. Eddie, Fat Gav and Hoppo continue to reside in the small town of Anderbury where they grew up.  Metal Mike has become a soulless advertising executive in the city, which is possibly worse than still living with your mother.  Nicky is missing in action.  The perpetrator of the murder they became so inextricable linked to as kids back in the 80’s is supposed to be dead. Then how come they are receiving notes from him in their mailboxes? The real kind and not the electronic, which is so much creepier in its archaic quaintness.

In fact, everything about The Chalk Man is creepy. C.J. Tudor does “disturbing” very well. Just enough to make the hairs stand up on the back of your neck, but not enough to make you want to drink in the middle of the day.  Add in some excellent twists and this becomes one great noir story, as well as an excellent examination of the bonds of childhood and how they come to affect the adults we become.

Stephen King wrote in Stand by Me that we never really have friends again like we did when we were twelve years old, and I think he may have been right about that.  Those kids are part of the history that defines us, even haunts us in the case of Eddie and the dismembered girl he and his gang found back in 1986. In order to wrestle his own demons, Eddie must figure out and ultimately resolve for himself what really happened all those years ago. This makes for a good “coming of middle-age tale” as well as a “keep you guessing “mystery. Well done, C.J. Tudor.

Of course, I am still haunted by that “barrel” comment, just in a different way. Nobody died as a result of that nasty nickname, except me from embarrassment.  But if I ever find the little snot-nose brat that first yelled it out in the schoolyard, I may just dismember him myself.

To find out more about C.J. Tudor and The Chalk Man, check out  her author Facebook page