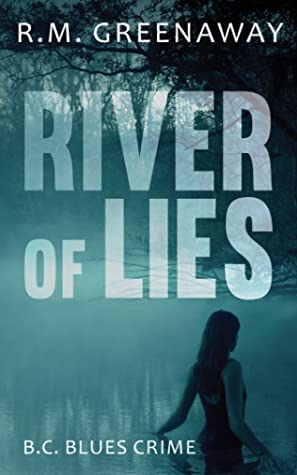 River of Lies By R.M. Greenaway

The dead bodies are dropping fast and furious in this latest novel in the B.C.  Blues Crime series by the talented R.M. Greenaway. If you are looking for dull moments, pick up another book. In the first few pages of River of Lies, a young woman is murdered in a parking lot on her way to a supper date. Right after, a baby gets kidnapped while her parents sip pre-dinner Chardonnay at home with friends. It’s enough for a person to give up entertaining all together.

Constable Cal Dion returns in this fifth book as our guilt-ridden anti-hero, still trying to outrun his secrets. He is teamed with Constable Dave Lieth to work the kidnapping case, but of course Lieth is secretly working Dion, assigned to the task by his superior. Constable JD Temple handles the murdered woman in the parking lot. She’s also concerned about Dion, and perhaps covering up for him. This is certainly enough crime and intrigue to keep our cast of detectives busy and hard at the job, despite it being February with Valentine’s Day to think about and all the associated Hallmark-hyped expectations of romance. Even the dead woman has a red and gold card covered with glitter in her purse, which I understand is killing plankton, fish and birds. The glitter, not the purse.

But romance must take a back seat when more people start dying under suspicious circumstances, all of them in some way connected with the two cases at hand. Soon, it becomes apparent that the initial murder and kidnap are themselves linked. This keeps our group of constables hopping, and also hoping that at least one of the people they interview will start telling them the truth. River of Lies is aptly named, since we must wade through a deep stream of unreliable characters through most of the book.  Everyone seems to have something to hide and is talking shite, as my Irish husband would say. You’d think the story took place in Washington, D.C. rather than British Columbia.

As with all R.M. Greenaway’s books, the characters are a wonderful strong point. They are so authentically rendered and complex, and none of them get old for me, even after five books in the series. Dion has always been my favorite. I love a good messed-up everyman, but this time around I found myself drawn to the female cop, JD Temple. JD can at one moment be terribly self-conscious and the next as confident as hell.  In this way she embodies the contradiction in self-esteem that plagues many successful women, where even Nobel prize winners ask their friends stupid questions like, “Do I look fat in this?”  I like strong and savvy characters that don’t have everything in life figured out, mostly because I don’t.

River of Lies surges with a powerful and unpredictable flow of suspense, with writing and character development indicative of a calmly practiced hand. Don’t miss your chance to get caught up in the current.

For more information on River of Lies, and other books by R.M. Greenaway, go to https://www.dundurn.com/authors/RM-Greenaway-0