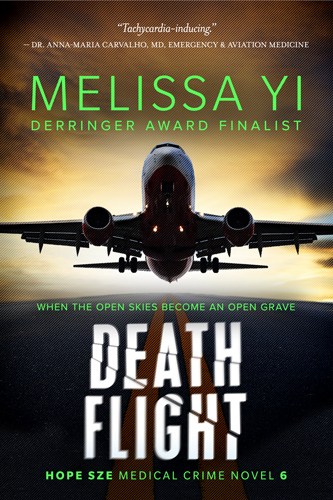 “My cochlea vibrates for thee.”

Only a real doctor and romantic could coin such a phrase. And Melissa Yi is both. Her bad guy busting medical resident and possible avatar, Dr. Hope Sze, takes to the not-so-friendly skies in Death Flight, the sixth book in her popular thriller series. Hope still can’t decide between Ryan and Tucker, the two men she is currently in love with, but that doesn’t keep her from her day job, which appears to be saving lives and saving the day in that order.

But let’s get back to Ryan and Tucker. It is the latter that accompanies her on the airplane. In a recent interview ,  I asked the author if Hope would be joining the mile-high club in this novel, but I’m afraid the two characters aren’t able to hold out for that long. The book starts off with a steamy sex scene in the airport departures family washroom. I will never look at a diaper deck in the same way again.

Of course, as soon as Hope sleeps with Tucker, he begins to get a bit annoying and Ryan starts to look better. Ah, the treachery of rose coloured lust goggles. What’s a girl to do?  Fortunately, all hell breaks loose on their flight back home to Canada from Los Angeles, so Hope doesn’t have a lot of time to stress about it. Picture every vicious, irritating, spoiled and obnoxious person you can think of and put them on an overbooked delayed plane bound for Montreal on Christmas Eve. It is a wonder to me that only one person gets murdered.

Joel J. Firestone is a wealthy porn flick producer and entitled loud mouth from business class who wants to throw Gladys’s support animal for anxiety out the window of economy. As much as the rest of the plane would like to do the same thing with the poorly trained mutt, they don’t relish being sucked out of the exit doors. Tucker and Hope attempt to subdue the violent blowhard. But while she has him pinned by the chest reverse cowgirl style in the aisle, someone manages to fatally stab him. No small feat on a mode of transport that doesn’t afford one anything more lethal than a spork.

I learned a great deal about the practice of medicine in this novel. Hope and Tucker must deal with repeated health emergencies as the story unfolds, and the author pulls from her own experience to teach us about everything from concussions to chest compressions. Knowledge of pharmaceuticals also plays a part. I know now that you can kill a person by combining too much of an everyday substance with the medication my husband has been on for years for a toasted pituitary. He can get annoying just like Tucker. So I have filed the information away in my “murder bag,” along with the woman in the news who offed her boyfriend by repeatedly spiking his morning coffee with Visine.

All mysteries will be solved before the plane finally hits the tarmac in la belle province, including the one in Hope’s heart. Her love triangle may be reduced to a line between two points, just like a flight path. But I wouldn’t hold her to it. The geometrics of love, like medicine, can be an art rather than a science. And Dr. Hope Sze’s life is never boring enough to travel in a straight line.

To get a copy of Death Flight, strap on your seat belt, then go to this link.