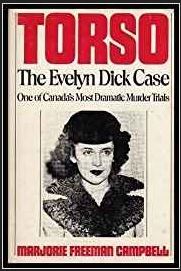 A very dear friend of mine asked if I would look into the story of Evelyn Dick because she had such fond childhood memories of the schoolyard chant:

You cut off his legs …

You cut off his arms …

You cut off his head …

Notwithstanding the stunning double entendre and my friend’s obviously twisted formative years, Evelyn Dick (nee Maclean) was worth more than a look. This homegrown Canadian hussy hailed from Hamilton (how’s that for alliteration, my friends?). She also stood trial for the murder of her husband, John Dick, whose shot, dismembered and decapitated torso was found by five schoolchildren who were hiking the Niagara Escarpment in March of 1946. Mr. Dick’s remains were identified by his brother-in-law based on a cyst on his backside and one undescended testicle.  Which just makes one wonder how close John Dick and his brother-in-law really were.

Evelyn was beautiful and in her early twenties, living beyond her means with no real source of income other than the sugar daddy variety when she married John Dick in late 1945. After only six months, the short-lived union was on the rocks. This is not surprising, as Evelyn continued her relationship with boyfriend Bill Bohozuk, not having received the memo about “cleaving” only unto her husband and all that jazz.  Although in retrospect, she might  have just misinterpreted the intended meaning of “cleave.”.

To complicate matters even further, Evelyn’s father, Don Maclean had been threatening her new husband (note: this is the Don Maclean who would plead guilty to assisting in the chopping up of his son-in-law and not the cool dude who sang “American Pie,” so don’t get confused). It seems John Dick had figured out that his father-in-law had been scamming hundreds of thousands of dollars from the Hamilton Street Railway where they both worked. It was five cents to get on the bus in those days, so that’s an awful lot of nickels pulled out of the fare box over the years. Nothing causes a riff between a husband and wife like blackmail of a family member.  It is right up there with leaving the toilet seat up.

A pipe with bullet holes in it, a gun, saws as well as bloody shoes belonging to the deceased were found in the basement of Evelyn’s family home. Bones and other nasty bits belonging to John Dick were discovered in the coal furnace of the house he and Evelyn had shared and his blood was all over the Packard she drove. However, when the police questioned Evelyn about her husband’s death she blamed the mafia, her boyfriend Bohozuk, and later even John Dick himself. She claimed he had pissed off a mysterious man who later came to the house with his decapitated body and forced her to drive it to the dump site.

None of these explanations got her very far. Evelyn Dick was convicted of murder and sentenced to hanging based mostly on circumstantial evidence and the fact that she couldn’t come up with even one decent lie. She later won an appeal where her lawyer argued that her dad was just as liable to have pulled the trigger as she was. But while Donald Maclean was the sole person to serve time in connection with the death of John Dick, it was only as an accessory after the fact. He was released from prison after five years. Bohozuk, Evelyn’s boyfriend was sentenced to nothing more than a stern warning to stay away from other people’s wives. As a result, John Dick’s murder remains technically unsolved.

But the story doesn’t end there, friends! Police found more than charred up nasty remains from John Dick in Evelyn’s house. They also found an infant encased in cement and stored in a suitcase in the attic that predated the Dick marriage. Evelyn had told her mother she gave the child up for adoption when she returned from the hospital in September 1944, but it looks like that wasn’t true. She couldn’t blame this one on her father or the mafia. Evelyn Dick was convicted of manslaughter in the death of her infant son and went to Kingston’s Prison for Women. She was released on parole in November 1958 after serving eleven years and faded into obscurity, except for her website, the three books, the Forgotten Rebels’ punk song, the TV Movie, a play, the film noir musical, Black Widow, and the souvenir shot glasses developed in her honour that read “The fastest way to a man’s heart is through his torso.”

And don’t forget the infamous playground chant of my very good friend. She tells me it still makes her giggle. I try to watch her around sharp things.

To buy a copy of Torso