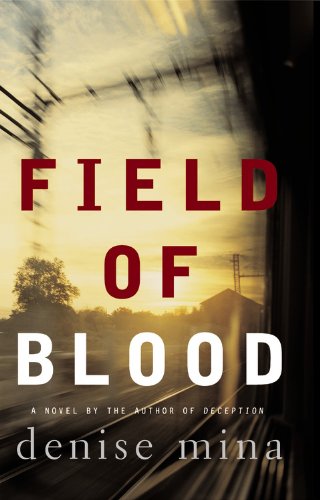 I love Denise Mina. Nobody does down and dirty Glasgow like she does. She makes Scotland into this wildly dangerous and exotic playground for criminals that barely manages to control itself enough for the trains to run. I am travelling there on holidays this fall and fully expect to be stabbed with the blowstick of a bagpipe as soon as I step off the plane.

Field of Blood is the first novel in Mina’s three book series featuring Patricia “Paddy” Meehan, a copy girl working at a Glasgow newspaper in the early 1980’s. The overt sexism and harassment Paddy encounters as she aspires to be a journalist reminds us that it wasn’t that long ago when men could still call you a “fat cow” in front of your co-workers and your boyfriend might find it strange that you wanted a career beyond making his tea every night. (Wait, not that long ago? Wasn’t that just last week?)

But like I said, Paddy’s got aspirations. When a toddler is viciously murdered by two young boys, one of which she is related to, Paddy finds herself at odds between getting the scoop and getting disowned. The comedic freeze-out her family gives her when they think she’s leaked information to the newspaper is reminiscent of a good Amish shunning, except people roll their r’s a lot. Nonetheless, Paddy ends up choosing her family over her career, but she still investigates behind the scenes knowing that there is more to the story than meets the eye.

The premise is definitely inspired by the murder of James Bulger in 1993 by two ten-year olds in Kirkby, Merseyside, England. This is a story that shocked and fascinated the world and has found its way into countless TV shows and books. However, there is no sense of overdone déjà vu here. Mina develops a different backstory for the boys involved that gives us far more explanation and understanding than we ever got in the original case. That’s the great thing about fiction, you can try to make sense of things that in real life make no sense at all, find answers for the unanswerable.  This coupled with Paddy being such a unique and original character causes us to be fascinated for all the right reasons as we follow her pursuit of the truth. She is an ambitious young woman who fits none of the clichés we expect.  Her life is drab and gritty and almost every moment of the day she thinks about being too fat. This adds to her authenticity, but bothered me at times because it sounded way too much like me.

The whole Protestant vs. Catholic thing is also a big part of this novel, along with the stinging misogyny. Of course, me in my North American little centric world over here didn’t realize this whole religion business was a thing in Scotland. But it appears that if Northern Ireland had “The Troubles” then the Scots at least had “The Nastily Inconvenients,” and it would behoove all of us to understand this history better if only to know where it is safe to wear a Rangers football jersey in Glasgow without getting one’s ass kicked.

I highly recommend Field of Blood, as well as the other two books in the Paddy Meehan series by Denise Mina, The Dead Hour and The Last Breath.  All of these books weave fantastic tales that are rich with brutally real characters and political history, a close-up of the underbelly of Scotland that’ll make you delightfully cringe without ever having to try haggis. Because that stuff is really gross and made of intestines, and even if people tell you it is good you should never, ever believe them.

But do believe me when I say Denise Mina is an author not to be missed. Check out Field of Blood and her other novels here. http://www.denisemina.com/

Or buy her book at any one of these links!