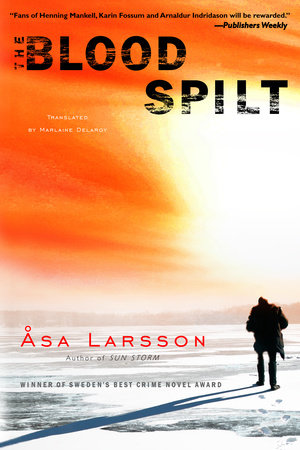 The Blood Spilt By Åsa Larsson

Before reviewing this book, I had to look up the term “Nordic Noir.” (https://en.wikipedia.org/wiki/Nordic_noir) Basically, it is crime fiction that is set somewhere in Scandinavia  that is short on metaphor and long on bleak landscapes.  The weather in that part of the world lends itself well to bleakness apparently, particularly in the north.  And this in turn, lends itself well to nasty crimes. Anyone who has lived through the month of February in Canada barely containing themselves form stabbing someone to death with an ice scraper can easily understand why. I also understand Nordic Noir tends to have a female protagonist. I find this rather compelling. but don’t entirely understand, as women in general are always down for a good metaphor, particularly if the pithy posts I see on Facebook are any indication.  Just when the caterpillar thought the world was over, he became a butterfly!  Stop wearing your wishbone where your backbone ought to be! What does that even mean?

Anyway, I digress. The Blood Spilt won Sweden’s Best Crime Novel award for Larsson and given that you can’t swing an Ikea catalogue without hitting a crime writer in that country, that’s a pretty huge accomplishment.  The story starts of with a dead female vicar swinging from the organ pipes of a local church. Well that is not entirely true. It starts with a heavily depressed Rebecka Martinsson, an attorney who will end up crossing paths with the mystery of the swinging vicar.  Coincidentally, Rebecka had to kill three men in the recent past in order to stop another murder spree involving priests. That’s why she is depressed.  It also may be why there are a dwindling number of people in Sweden interested in joining the clergy.

I liked how both Rebecka and a policewoman named Anna-Maria Mella worked in parallel but separately in order to figure out what happened to the dead woman.  Rebecka, mostly because she is in the wrong place at the right time, and the policewoman because it is her job. Larsson takes time to explore the personalities of both women and their backstories. Anna-Maria is a young mother with marital and work-life balance issues. Rebecka is a broken woman trying to salvage her career and find her way back from PTSD.  Larsson does a wonderful job of detailing and expanding all her characters in the book. I was particularly smitten with a mentally challenged man that Rebecka befriends. He reminds me of my cousin, Wayne, who has the mental age of a seven-year-old but possesses more wisdom at times than a team of Platos.

It is strange that a country that brought us the sunny songs of Abba, could also bring us such disturbing but beautifully crafted noir. But I guess even the Dancing Queen has days when her mood is too dark and morally complex to move her feet.  Except to walk out the door and fetch the ice scraper, that is.  But then I suppose she does a different dance, and the bloodstains are never coming out of that shiny white pantsuit with the rhinestones.

To learn more about Åsa Larsson and her books, go to  https://www.penguinrandomhouse.com/authors/69304/asa-larsson/