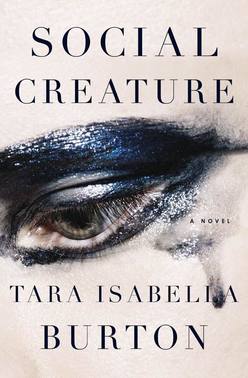 Props to Stacey Maddon, my friend and past Writing Mystery teacher, who put me on to this novel. It was in Stacey’s class that I started what would become the first Candace Starr crime novel, The Starr Sting Scale (Dundurn Press, Feb 2020). So, I guess I have more to thank Stacey for than his excellence in suggested reading lists.

But back to Social Creature. When lonely Louise meets up with life-of-the-party Lavinia , she feels like one of the chosen ones, basking in the glow of Lavinia’s gregarious and glamourous lifestyle.  The two run the gauntlet of New York City’s in-crowd party scene. They dance at night clubs made up as haunted hotels alongside insane asylum performance art. They attend speakeasies that you can only get into if you sign up in a telephone booth guest book two hours before (and then only if you are deemed not boring enough to receive a text with its secret location). They hang out with pompous literati, drink copious amounts of alcohol and do boutique illicit drugs. They even quote Tennyson while running naked along the frigid winter shoreline, then get matching tattoos on their forearms that read “More Poetry” as a reminder. With Lavinia’s money and connections, she and Louise are able to access all that is possible for young people with a deep sense of FOMO, and more energy than sense. And in all their adventures, as it is with most of their contemporaries, they incessantly take pictures and post them onto social media. Likes being the new currency in order to measure a full life worth living.

But as with so many friendships where one has all the power and the other so much to lose, trouble ensues.  It is hard to get up in the morning and go to work as a barista in a coffee shop when you’ve been doing molly until six in the morning at an all-night-open-bar-kiss-a-stranger-and-see party.  Lavinia gets demanding. Louise lets things slide. Their relationship becomes a twisted unbalanced obsessive one. But all the world sees are the smiling selfies. Best friends forever! Which I suppose ends up being true, because Lavinia ends up dead, which is a forever kind of thing.

Lately I have been contemplating our non-stop plugged-in digital lifestyle. The constant barrage of texts, the one-upmanship of the Facebook post. I try not to be seduced. But if you have ever heard the siren song of that little ping on your phone, you know that it is tough not to be lured onto its rocky shores. Reading this book, I found the anxiety of a thousand of those pings mounting up for Louise, literally and figuratively.  It made me want to take my iPhone and bury it under the floor boards, like Edgar Allen Poe’s ceaselessly  beating tell tale heart.

Come for a sneak peak into New York City’s wild parties and underground sex clubs. Stay for the taut thriller touted as “A Talented Mr. Ripley for the digital age.” You won’t be disappointed.

Just make sure you take a selfie while you’re reading the book, so I can like it.

To learn more about Tara Isabella Burton and her writing, go to http://www.taraisabellaburton.com/