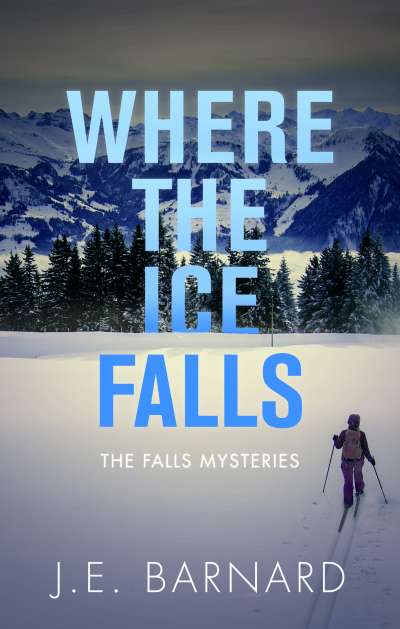 Where the Ice Falls By J.E. Barnard

What better way to cool off during the dog days of summer than with a frosty winter mystery? Award-winning author J.E. Barnard’s Where the Ice Falls (The Falls Mysteries #2) is set in Alberta in late December.  After reading it, I would guess that most of the people who live in this area of Canada year-round know more than just a few words for snow.

Setting is definitely a character in this book, and a menacing one at that. There are blizzards that scatter cars on the side of the road like discarded Tonka toys, heavy snow and ice that can avalanche down a slope at a sneeze, and a threat of exposure and frostbite that keeps everyone on their toes (if they want to keep them) with well-packed emergency kits.

Not surprisingly then, our first corpse is found in a woodshed frozen stiff as a petrified log. Eric didn’t have his emergency kit, though he knew to carry one. Not that it would have done him a whole lot of good, since it looks like he’s been locked in that shed for over a month. You can only survive in sub-zero temperatures with a six-pack of granola bars and a pair of extra socks for so long.

But in Hamlet-like fashion, Eric’s ghost seems to be hanging around with some unfinished business concerning his icy death. Specifically, he is hanging around Zoe, who was there when his body was found. She and her family had planned to spend the holidays at the upscale chalet owned by Zoe’s oil magnate boss, but the dead body in the outbuilding really put a damper on their Christmas cheer. Unlike the Shakespearean play though, Eric is only providing hints to the source of his demise.  It will ultimately be up to the living to figure out what happened to him. Enter ex-Mountie, Lacey McCrae who came up to the chalet with her best friend, Dee to get some real estate pictures (Zoe’s boss is planning to sell).  I don’t know what the housing market is like in Alberta, but I am thinking that having an adult-sized Popsicle Pete on the property might affect the list price.

While the supernatural component is an important element in this story, I don’t want you to get the idea that Eric’s ghost is the celestial sleuth of this tale. Lacey’s approach to solving the mystery is as methodical as a police procedural, and her pragmatic approach strikes a nice balance with the more ethereal clues we are given by Zoe in her communing with the spirit world. Think Ghost meets Veronica Mars, but without that steamy pottery wheel scene, or the teenage angst.

I also don’t want you to think that this is a book that will leave you cold. Just like the warm breath of the chinook that blows in to melt the snow drifts periodically, J.E. Barnard intersperses her story of coolly calculated murder with the warming trend of family and friends— who pull together in the face of tragedy, illness, or just to chat over a steaming hot cup of tea. We are left with the impression that people stay close to one another during an Albertan winter, and it may not just be to keep from freezing to death.

To find out more about this author and her books, go to https://www.dundurn.com/authors/JE-Barnard   OR http://www.jaynebarnard.ca/