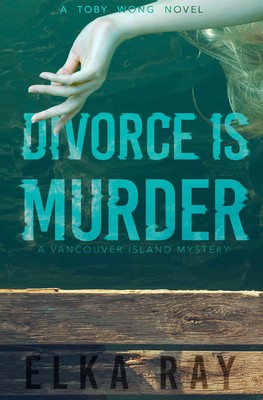 Divorce is Murder By Elka Ray

Divorce is Murder. I can attest to that. Although despite the messy demise of an ill-fated starter marriage in my twenties, no one seemed driven to committing an actual homicide (note to self: cancel outstanding professional contract hit on ex-husband arranged during a night with friends and too much Sangria).

But when Josh Barton walks into Toby Wong’s law office in the novel, Divorce is Murder, he is looking for a less nefarious way to end his marriage. Or so it seems at first. He wants Toby to handle the divorce from his wife, Tonya. Which would be standard stuff. If not for the fact that Josh was Toby’s Grade Eight crush. And Tonya was one of the mean girls who made her life a living pubescent hell back at summer camp all those years ago. When Tonya ends up dead, this further complicates things. Although her murder does make for a whole lot less paperwork around dissolution of assets. Nonetheless, Toby finds herself drawn into the investigation of Tonya’s death, and is forced to question whether her handsome former high school hottie is really a cold-blooded killer. Even worse, she must come face to face with the other members of Tonya’s mean girl posse from summer camp in order to find out what really happened to the dead woman.

Now mean girls, possibly even more than divorce, can create a situation where a person might consider a little foul play in my humble opinion.  Kim Hexamer made me eat a bug once in seventh grade. And although this was decades ago, I still think if I met her for coffee today, I might try to slip some Ex-Lax into her latte. Old bullying runs deep. As do old crushes. It is amazing that we can be full-on adults and continue to feel the sting of that thumb tack left on our chair in social studies. Or like Toby, be an accomplished professional woman and still dissolve into a vat of goo at the sight of the boy whose last name we used to pair with our first to write over and over again at the back of a three ring notebook when we should have been paying attention in French.

Toby Wong is a wonderful character, one that it easily empathized with and understood while still being nuanced and even slightly exotic with her Chinese-Canadian background and her Tarot card reading mother. Divorce is Murder is not the noir that Elka Ray brought us in her books like Saigon Dark and Hanoi Jane but is still a delicious mystery set along the shores of Vancouver Island with its rich land and seascapes. It showcases the author’s skill and flexibility as a writer that she can write an engaging mystery in both the gritty and cozy realms. I devoured the novel in a weekend, eagerly following Toby as she faced the childhood crimes made against her in the past while trying to ascertain who the present-day criminals were.  And she did it all without slipping a chocolate laxative into anyone’s coffee, which just proves she is a better woman than me.

Elka Ray has just signed a contract for a second novel featuring Toby Wong and her escapades. I’m not surprised. Readers will want to hear more from her west coast lawyer sleuth.  I look forward to where the author takes this unique everywoman character and to see what “is murder” in her next book.

To find out more about Divorce is Murder and Elka Ray go to http://elkaray.com/