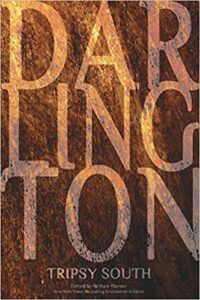 Such was the approach I attempted to take while reading Darlington. This novel is a sort of Kerouac-like stream of consciousness that follows a few months in the life of Tommy Darlington – a part-time Florida cab driver and full-time hit-man, who makes such an astronomical amount of money in the latter profession that I am considering a change in career. Really, I don’t know if people realize they would probably make more money busking for change than working as a professional author. The idea of making millions for “offing” people, rather than writing about it, has its appeal for me.

Darlington does not follow a traditional story arc, so be prepared. It leads down some blind alleys, and the chapters are more a linked series of vignettes of Tommy’s violent life contrasted with his romantic one. But the gleaming pearls of wisdom that are interspersed within the deep darkness of this gritty noir are worth the brief moments of disorientation. I found myself continually highlighting one insightful, poignant and brilliant line after the other. Tripsy South can coin a phrase in the flick of a Florida gator’s tale, using the same seductive grace and threatening beauty as that dangerous reptile.

I’ve been challenged lately with finding well-written noir. Too many of the supposedly dark thrillers I pick up these days seem to have a vocabulary reminiscent of a pre-pubescent teen and sensibilities to match. I’d like to think that readers demand more than that from their genre fiction in this modern age.  I mean, I’m not looking for Tolstoy or anything, but I’m not looking for The Hardy Boys & The Tower Treasure either. Darlington proves that genre and literary fiction are not mutually exclusive categories. Well done, Ms. South.

Rest assured, Tommy is no Joe Hardy. Although he does pine for his girlfriend Rachel, giving him a humanizing touch. Rachel is a writer, so she could really use some of those millions Tommy earns, as I explained earlier. But almost getting herself killed because of Tommy’s associations sort of puts a damper on their relationship. Nothing screws up date night like a nasty abduction.  Although, I would be more put off by some of the racial slurs Tommy uses than his dangerous profession, although they are there I suspect to convey the overall amorality of the character.  I don’t know why this should offend me more than the fact that the man kills dozens of people in cold blood for a living, but it does. If we are meant to see Tommy Darlington as one of the “warriors with a heart (p. 228),” these type of comments are not really in keeping with my image of what that means.

I look forward to reading more from this author, and allowing her wisdom to flow over me like a warm but dark Sarasota Bay wave.

To find out more about this book and the author, Tripsy South go here https://tripsysouth.com/

Thanks to the publisher and Netgalley for providing me with an advance copy of this book in exchange for an honest and unbiased review.