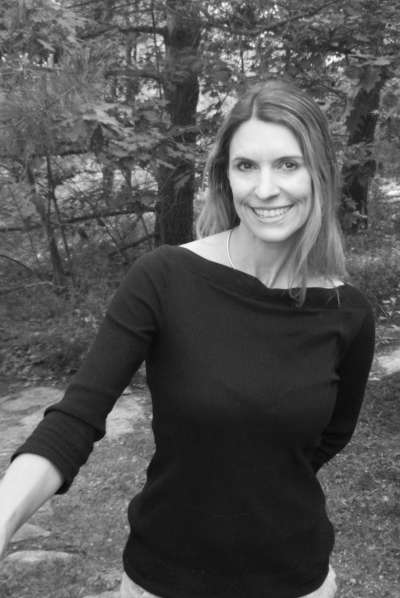 ERIN RUDDY is a writer, editor, and award-winning journalist. She is currently the executive editor at MediaEdge Communications. She lives in Toronto.

Your debut novel, Tell Me My Name, is a nail-biting, domestic noir set in cottage country. What inspired you to write a story in this genre and this setting?

The idea came to me shortly after we’d purchased our new cottage in the summer of 2016. There was something ominous about the house next door, simply because it was beautifully maintained yet it always seemed to be empty. After months of wondering who owned it, I started to imagine someone watching us through the trees—which now seems hilarious given I’ve met the neighbours and they’re lovely. Anyway… I eventually came up with the idea of putting a dark twist on the Rumpelstiltskin folktale and placing it in a remote cottage setting. I had chills when it came to me and I started hammering out the manuscript that very day. Three months later, the first draft was complete.

The book had its publication shifted from the summer to the fall due to the Covid-19 crisis. What was that like?

It hurt, I’m not going to lie. The anticipation (and preparation) for my June book launch had been a year in the making – also, “Tell Me My Name” has a real summer dock vibe, so getting it out there before cottage season was important to me. That said, October is known for its spook factor, so if I had to pick a second best month to release this novel, it would probably be October. Mostly I’m gutted that my book release party was cancelled. I’d been planning an epic party at The Pilot in Toronto featuring a killer live band I’d hired to play “stalker-themed” cover songs. Now I have to appear on camera, and as someone who is shy and awkward, this is not a compelling alternative.

I understand you grew up loving movies like Jaws, The Shining, Aliens and The Thing. What is your favourite recent scary movie?

I have seen a gazillion scary movies lately because my 13-year-old son is obsessed with them—although I’m less into violence and more into psychological suspense. That said, there isn’t a zombie apocalypse movie I haven’t seen. “The Babadook”, however, truly stands out as one of the scariest movies I’ve ever watched. Written and directed by the exceptionally talented Jennifer Kent, it was both moving and chilling, with motherhood being a central theme. Don’t watch it if bedtime stories are still part of your nightly routine.

Do you have an outdoor shower at your cottage? (Editor’s note: If you read Erin’s novel, you’ll understand how creepy this question is)

No, sadly. My husband was supposed to build one the summer we moved in. I guess he changed his mind after reading the opening scenes of my book.

So many reviewers and readers have been drawn in by the unique premise of Tell Me My Name, where a kidnapped woman has three chances to guess her captor’s name or her husband will suffer the brutal consequences.  What gave you the idea for such a compelling “What If” scenario?

I feel like we’ve all had those creepy encounters throughout our lives with individuals who come off as unstable or threatening. It might be a work colleague, a waiter, or someone we regrettably dated— but when those heebie-jeebies come along, it’s a signal to leave and not look back! The feeling itself is as universal as the stress of forgetting a person’s name. Put those two things together, and bingo…instant tension.

What is your favourite thing to do at the cottage (besides using an outdoor shower)?

I enjoy everything about being at the cottage. We are fortunate that ours also doubles as a ski chalet, so it’s just as wonderful to be there in the winter— and luckily, as I mentioned above, our neighbours are not psychotic killers.

This might be an unpopular answer, but generally speaking, I do think there is a difference. I don’t think one is better than the other, mind you—just that the perspective and experiences of a man are inherently different than those of a woman. Earlier this year, I read “The Whisper Man” by Alex North and was touched by the way he approached the father-son relationship. I’m certain I could not have captured the nuances of that bond or the angst of what they go through in the same honest manner he did. That’s not to say authors should be restricted from writing opposite-sex characters—just that some of the dialogue may not ring quite as true.

How has your background as a journalist informed your writing?

I think it’s helped me a lot, as every day I get to investigate new subjects while honing my skills at the keyboard. Not a day has gone by in the last two decades that I haven’t cranked out 2 – 4,000 words. The problem is, often the last thing I feel like doing after work is sitting back down at the computer. I’ll take the bad with the good however, because I really do love both.

What are you working on now?

Right now I am working on a thriller about two estranged brothers, a woman caught between them, and a scandal that threatens to destroy her. It’s good ‘n racy, and I hope to have it finished by Christmas.

To learn more about Erin Ruddy and her new novel, go to https://www.erinhruddy.com/